In late October 2021, the World Brewers Cup was held in Milan, Italy. National Brewers Cup champions representing their respective countries gathered to compete at the world level, but only 6 brewers advanced to the final round. Among them was Ply Pasarj, co-owner of Rogue Wave Coffee Roasters in Edmonton, Alberta, Canada. A deeply knowledgeable roaster and brewer, Pasarj actually began as a home brewer before joining Rogue Wave.

Origami and Slow Pour Supply caught up with Pasarj to discuss his routine at the World Brewers Cup, why he loves the Origami Dripper, and methods of agitating coffee during a brew.

This interview has been edited and condensed for clarity

Can you tell us a bit about yourself?

Sure. My name is Ply and I co-own Rogue Wave Coffee Roasters. We, as a company, have been around for about 6 years, and I actually joined about 3 years ago. I used to be a regular customer at Rogue Wave Coffee back when I was a home brewer, and I was invited to join Rogue Wave as a partner in late 2018.

I've been doing everything coffee at the roastery—from roasting and sourcing green coffee, being a barista for the first couple of years when we didn't have any staff, and also sourcing products for the shop. My role, currently, is mainly sourcing products—both green coffee and equipment—and shipping, receiving, and account manager for our wholesalers. I'm also the main competitor who goes out to compete for our shop, as well.

What was the process like to find the “perfect” coffee for the competition? You chose to use a blend of two varietals—both Panama Gesha, but of different processes. How did you come to the decision of using a blend of these two varietals, and what quality were you looking to achieve during this process?

Everyone seems to be chasing the perfect cup of coffee. But a perfect coffee is very different from person to person. Right? So, during my routine, I used two kinds of Geisha: one is from Hacienda Cañas Verdes, and the other one is from Finca Carmen.

The first coffee is from Hacienda Cañas Verdes. I've been working with José Luttrell, who's the owner and producer of Hacienda Cañas Verdes for two years. Usually, he sends us pretty much every coffee that they have and then we would cup and try to get the best coffee out of them that we can. However, the one that I wanted this time went on to the Best Of Panama auction, so I couldn't buy it. Instead, we got two anaerobic, slow-dry lots, and one of them I decided to use for the competition.

The other one from Finca Carmen, this is our first year working with Carlos Aguilera. For me, I wanted to have another connection in Panama, because we only have a couple of direct connections there. So, I wanted to expand and get to know more producers and more farms. Finca Carmen was one of them that we contacted and asked for a sample.

Now, during the selection, I didn't think about blending. With the current pandemic situation, it was very hard to know if the competition was actually going to go on for sure. It got postponed and pushed from Melbourne, to Greece, and now to Milan. We weren't sure it was actually going to happen. But then, when they made the announcement, it was really close, so we didn't have time to explore more coffee. We did a few auction lots, which I also tested but didn't fit. All of them were very good and could have been used for competition, but didn't fit what I was looking for.

So I had my coaches Nelson and Cole, who both competed in multiple competitions, and we were brainstorming. We drank about 80 coffees in two days. We were brewing like all these different roasts because I was roasting 10 profiles trying to figure out my competition coffee. Eventually, we found that the coffee from Cañas Verdes was very good, but it wasn't complex enough. It was an arabica slow-dry process, so it had that tropical notes I was looking for, and it had the sweetness and it had the body, but the finish was a little off. It's a little unbalanced. And when it's cold, it was a little on the umami, or the wine-y side. Then when you drink the Cañas Verdes and the other Finca Carmen, they had the complexity, the clean-ness, and the florals that I wanted. So, okay, why don't we try to create something that has all these palates. We started off with two Gesha coffees from Cañas Verdes—one washed, one natural. It was pretty nice, and I was dialing in for that. It had a very good white wine quality, but personally I didn't enjoy it as much as some other people who tried it. So, okay, let's try to blend it with the Finca Carmen Gesha and see how it would work. And it worked much better in terms of my presentation. That's when I started roasting these two coffees in about 20 different profiles, and tried to blend them and it was ridiculous how much work went into it. I couldn't actually choose the profile of the final coffee because I was testing out the blend as well until two days before competition. My team was so stressed—they were like, Ply, what are you going to do? But it worked out and I had the two coffees work really well together.

It's interesting that the two coffees were ground at different grind sizes. What was the experimental process like to come up with the blend that you are happy with?

When I used the coffee in competition, the natural was grinding coarser than the washed. I needed to grind a little finer as I was brewing them at the same temperature, and at a lower temperature—92 degrees celsius. So, I need to grind finer to be able to extract the citrus notes, the sweetness, and the floral notes that I wanted. I was actually grinding differently—the opposite way—because I wanted a lot of tropical flavors to come out. However, I found that once it kind of cooled down a little bit, the coffee lost the floral notes. I wanted the floral notes to happen at all temperature levels, but you lost it if you switched the grind size around. So, by grinding the wash finer, I was able to maintain the floral flavors.

Yes! We really like the plastic origami dripper as well. It's the one we use now in the cafe, and people keep asking where they can buy it! [Laughs] In my opinion, it definitely brews evenly—especially because of the cone-shaped paper. With the cone-shaped paper, I actually find that the plastic is a little more consistent compared to the ceramic. With the plastic, there's a little more space for the air to go in. So, the airflow is much better. When you use the Kalita, it's about the same for flow-rate, however the plastic that Origami uses is so good at heat-retention that I can hold the dripper and brew it without it being too hot to hold. That's one of the reasons I chose it as well for my competition routine: I wanted to maintain the temperature, and the plastic is very good at making my brew temperature more stable than ceramic.

Now, right before I went to Milan, I was using the cone-shaped paper. And I love coffee brewed with cone-shaped paper more than Kalita paper, or flat-bottomed paper. But, that is because I like more acidity and more complexity, and I find that with the cone-shape you get more complexity, whereas with the flat-bottom you get more balance—it's easier to drink and has a little less acidity but more sweetness. During the competition, I needed to tame my acidity because brewing at lower temperatures usually means you perceive higher acidity and lower sweetness. So, I switched and used flat-bottom paper to balance that out.

Let's talk about the height of your pour, which you executed at a higher level during your second pour for more agitation. Can you tell us more about how we can use this tool to change our extraction process for our brews?

There's a lot of ways you can agitate your coffee: you can use a spoon, you can stir, you can swirl—or, someone who doesn't like to agitate can use a Melodrip to not agitate. So, agitation is one factor you can use to optimize the pour over to the way you want it. To me, I don't like to touch the dripper during the brew. [Laughs] If I need to swirl, I swirl, but that's what I do mostly on the style of coffee I like.

However, to increase agitation or to reduce agitation, I use the flow rate of the kettle and the height. By pouring at a higher height, water will hit the bed with more power. You actually increase the agitation that way. On my third pour, I lower my kettle as low as possible, because at that time I don't want to create more agitation. I want to actually reduce my extraction a little bit toward the finish, but I want a lot of extraction in the middle. So, by using the kettle, utilizing the tools that I have, which in this case, my water is a tool as well as my solvent of extraction, I'm able to control the agitation. I also mentioned this to a few of people who asked: if you have a gooseneck kettle, try pouring really high versus really low using the same recipe and same grind size and you will see the differences in how you're producing coffee. You can use that to optimize the coffee to your liking.

There are different types of spouts for kettles—some of them are downward pour, some of them are more forward pour. When you're using height as a tool to maintain or increase or decrease your agitation, is there a particular style of kettle that you prefer?

Sure. With any kettle you can utilize it to pour different heights. But, for me personally, I like the downward spout better than the forward spout. Forward spouts increase, or agitate, the coffee more so than the downward spout if you poured them at the same height and same speed. So, it goes a little deeper.

In Milan, I had to use a kettle with a spout that is curved more so the water actually drops instead of going forward. It's because the hole is thicker so it drops with a thicker stream. With a thicker stream and not so pointy a stream. It doesn't create as much agitation.

Can you share one tip that you find important and that shouldn't be missed for the manual brewing process?

Most people brew for themselves. So, you shouldn't forget that you're brewing it for yourself and you're brewing the coffee the way that you would want to drink it. Don't be too tied up with recipes. Make sure that you're dialing the coffee in for your own taste. That's my recommendation for home brewers who are just starting: recipe is a guide. It's like cooking—you add as much salt as you want to make it taste good to you. Brewing coffee is the same thing. Explore the coffee. Explore the recipe. Find the one that works for you, and then change it so that it fits your taste.

Thank you for speaking with us, Ply.
And congratulations again!

Ply Pasarj, of Rogue Wave Coffee, placed as a Finalist at the World Brewer's Cup in Milan in October 2021. He introduced the Origami Air S to the world through his competition, brewing a blend of two Gesha varietals from Panama: 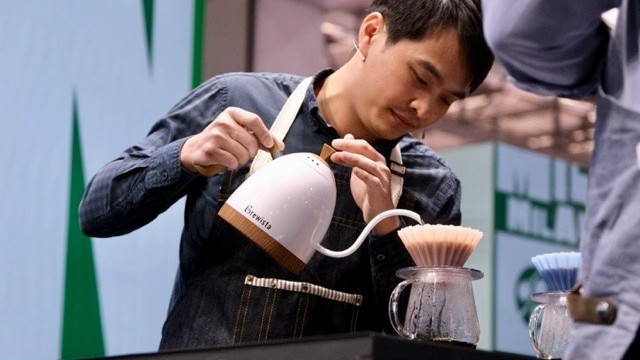 Welcome to Slow Pour Supply! Sign up for our newsletter for 5% off your first order.